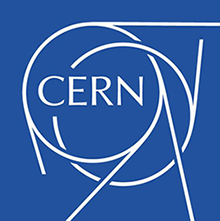 Department of Atomic Energy, DAE, entered into a co-operation agreement with CERN on 28th March 1991, followed by a protocol for collaboration in Large Hadron Collider (LHC) on 29th March 1996. Raja Ramanna Centre for Advanced Technology, RRCAT, Indore served as DAE’s nodal institute for this collaboration.

CERN invited India to participate in construction/commissioning of Advanced Accelerators under Novel Accelerator Technology Protocol, NAT, (signed in 2006) viz., Linac 4 (160MeV front end accelerator) for luminosity upgrade as a front end of Superconducting Proton Accelerator, SPL and Compact Linder Collider Test Facility, CTF3 as demonstration for Compact Linear Collider, CLIC. Some of these high technology items have been fully designed, developed and tested in India and installed at CERN. 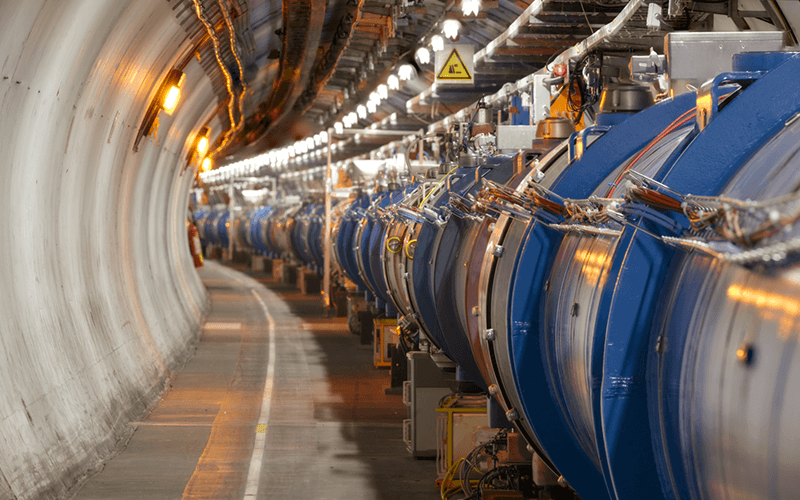 The participation in the accelerator technology proved highly beneficial for India as, (a) it enabled participation of our Industry in projects requiring highest standard, challenges and monitoring as well as building infrastructure to produced such high tech components (b) it enabled getting access to the technological know-how of several more challenging technologies that has helped in capacity building and in-house applications (c) our young scientists and engineers had a chance to learn many of these technologies as well as aspects of accelerator design and commissioning while they contributed to CERN projects. Indians being involved in all stages of the design, development and production along with the CERN teams, it has created great opportunities for learning, studies and experimental knowledge.

As a continuation of the collaborative efforts, access to the challenging technologies, equipment and its supply from CERN to India continued, prominent examples are testing and supply of four sets of 1MW CW klystrons, 1MW Circulators, waveguide components and RF hardware.

India has been part of the journey of accelerating science for almost three decades now. This fascinating odyssey started with indian scientists participating in WA93 experiment at CERN’s Superproton Synchrotron. Currently India is significantly contributing in ALICE and CMS experiments at the LHC. Several Indian Universities and institutes are members of one or both of these two collaborative experiments. Alongwith participation in the harvest of rich physics provided by the experiments, the indian groups has also contributed in terms of development, fabrication and operation of several sub-detectors or detector components used in them. The Photon Multiplicity Detector (PMD) is a gas based pre-shower multiplicity detector used in ALICE to count the photons in the forward angles of the collisions. This detector is fully conceptualized and fabricated in India. A large cathode pad chamber based station for the Muon Spectrometer in ALICE has also been built in India. As a significant technological development a 16 channel ASIC, named MANAS, was developed and fabricated in India and supplied to CERN. As part of the upgrade program in ALICE, a state of the art high speed FPGA based PCIe40 read out card is being fabricated in India. 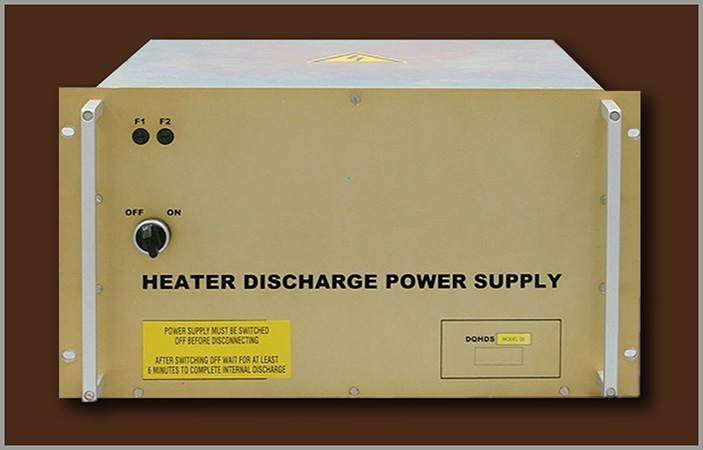 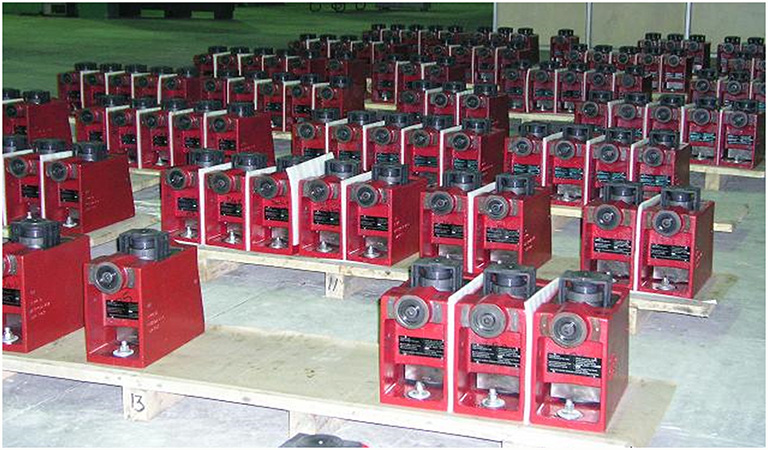 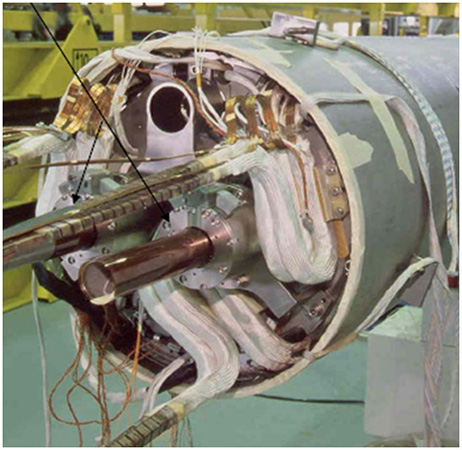 Two detectors, one based on proportional counter technology and the other based on cathode pad chamber technology, were developed for the ALICE experiment. 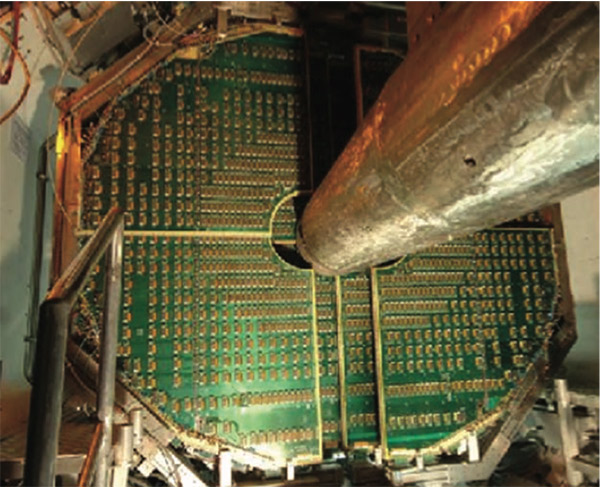 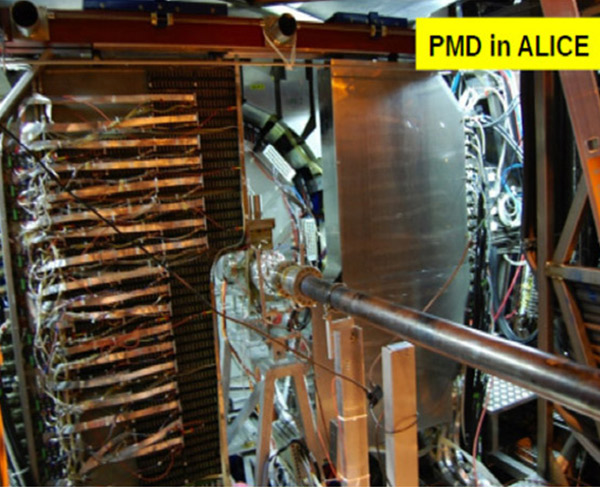 A 16 channel multiplexed read out ASIC was also developed in India.

The Common Readout Unit (CRU), a crucial component for ALICE, is being developed and fabricated in India. This FPGA based read out card will be used in ALICE when it comes alive for RUN3. 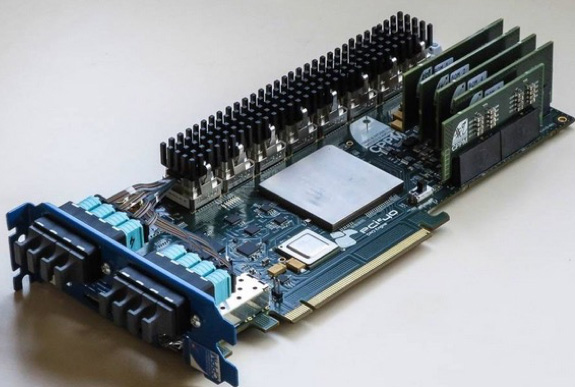 1. What is the function of Precision Magnet Positioning System (PMPS) Jacks used in the LHC?

The demanding task of magnet assembly is made easier as well as extremely precise by PMPS Jacks. They enable just one person to move the heavy magnet assembly and position it very precisely.

2. With what accuracy were the dipole magnet assemblies in LHC needed to be placed and maintained?

The dipole magnet assemblies, each with a length of 15 meters and weighing more than 32 tons, needed to be positioned with a precision of 50 micrometer all along the 27 km length of the LHC, so that the set position remains within 100 micrometer when the transverse force reaches a value of 0.5 ton and within 1 mm under a very severe transverse load of 8 tons.

3. How many PMPS jacks were supplied by India to CERN for the LHC?

In all, 6,800 of these devices were made by Indian industry and supplied to CERN under the responsibility of Raja Ramanna Centre for Advanced Technology, Indore, India.

4. What were the major challenges involved in the design of the PMPS jacks?

To minimize the weight and cost of the jacks and ensure low operating torque.

How many MCS and MCDO assemblies have been used in the LHC ring?

5. What are major sub-parts of a corrector magnet assembly?

6. What type of wire is used to wind the corrector coils?

The coils are wound from solid rectangular superconducting wire of Niobium-Titanium in Copper matrix.

7. At what temperature were the magnetic measurements done to qualify the magnets?

8. What is the maximum current that flows through the dipole magnets in the LHC?

9. What is the function of Quench heater power supply in the LHC ring?

A magnet quench occurs when part of the superconducting cable becomes normally-conducting, causing a surge in resistance. When any abnormal voltage build-up across magnet coils is detected, the quench heater power supply (QHPS) powers the quench heater strips and distribute the energy evenly in entire magnet.

10. What are two major components of quench detection electronics?

Each unit consists of two devices, namely the local quench detector and the acquisition and monitoring controller, together in a 3U, 19-inch crate.

11. How many man-years of support was provided by DAE to CERN for testing of LHC cryomagnets?

12. How many test benches were made in building SM18 for testing of cryomagnets?

13. What were the major responsibilities of operation team at SM18 for qualifying a cryomagnet for LHC?

For each magnet, the operation team had to verify the integrity of the cryogenics, mechanics and electrical insulation; qualify the performance of the protection systems; train the magnet up to the nominal field or higher; characterize the field; ensure that the magnet met the design criteria; and finally accept the magnet according to its performance in quenches and in training.

14. At what temperatures were the cryomagnets tested and qualified in SM18 test facility?

The cryomagnets were tested and characterized as part of a quality assurance plan at superfluid helium temperatures of 1.8 degrees Kelvin as well as at room temperature (warm) on dedicated test stations before being finally deployed in the ring.